''Evolution has selected the endocannabinoids to regulate numerous biological phenomena and to counteract biochemical imbalances.'' 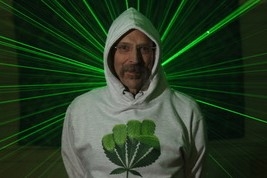 All life is dependant upon the maintenance of its dynamic organization through sufficient input of nutrients and removal of wastes. The more complicated an organism is, the more complex the coordination required to accomplish these essential tasks necessary to maintain this vital flow of inputs and outputs. Coordination requires communication. Cells communicate by thousands of different, but specific, receptors on cell surfaces that respond to thousands of different, but also specific, molecules (ligands) that bind to the receptors, cannabinoids being one of them.

The endocannabinoid system appears to be quite ancient, with some of its components dating back about 600 million years to when the first multicellular organ-isms appeared. As evolution proceeded, the role that the cannabinoid system played in animal life continuously increased. It is now known that this system maintains homeostasis within and across the organizational scales of all animals. Within a cell, cannabinoids control basic metabolic processes such as glucose metabolism but they also serve as a way of communication between cells. In general, cannabinoids modulate and coordinate tissues, organ and body systems (including the cardiovascular, digestive, endocrine, excretory, immune, musculo-skeletal, nervous, reproductive and respiratory systems). The effects of cannabinoids on consciousness are not well understood, but are well known, and underlie recreational cannabis use.

In the light of the current global situation, it is noteworthy to highlight the role of the cannabinoids in the immune system. The role of the immune system is simplistically thought of as protecting us from foreign attack. The immune system accomplishes these tasks, in part, by balancing two mutually opposed pathways known, respectively, as the "Th1" and "Th2"response. Th1 response tends to produce the proinflammatory responses responsible for killing intracellular parasites and for perpetuating autoimmune responses (interferon gamma…). Excessive proinflammatory responses can lead to uncontrolled tissue damage, so there needs to be a mechanism to counteract this. The Th2 response is associated with anti-inflammatory and allergic responses (interleukins 4, 5, 10, 13…). In excess, Th2 responses will counteract the Th1 mediated microbicidal action. The optimal scenario would therefore seem to be that humans should produce a well balanced Th1 and Th2 response, suited to the immune challenge. While cannabinoids are often classified as immune inhibitors, this is only partially true. Namely cannabinoids actually promote the Th2 response while they inhibit the Th1 response. Thus cannabinoids are important homeostatic modulators of the immune system and have immense medical potential as such. Their potential goes well beyond conditions of the immune system, such as autoimmune disorders, since in reality, many age related diseases, are characterized by an excessive Th1-driven immune response. Multiple sclerosis, arthritis, Crohn's disease, and diabetes are all diseases that fall into this category.

Cannabinoids are known to be beneficial in some cases of viral infection, such as with HIV, Kaposi’s sarcoma sarcoma, influenza and hepatitis C, where it is possible to control the viral replication by sensible use of cannabinoids and metabolic manipulation (turning on the fat burning mode). Using phytocannabinoids that bind to CB2 receptors further supports our cells to go into the fat burning. Much recent research is showing that with resurrecting, restructuring, rebuilding biochemistry that is associated with fat burning strongly improves our health, regardless if the condition is cancer, autoimmune, inflammatory, pain or a viral infection.  This switch can rather simply be supported by supplementing with some natural substances, like NAC N-acetyl cysteine, vitamin D, CBD, alpha lipoic acid, resveratrol with niacin and polyunsaturated fatty acids.

In face of the current global pandemic, it has become more then clear that contemporary antiviral medical technology is inadequate to meet the world's immediate challenges and by using sensible supplements, including cannabinoids, we can equip our biology with the necessary building blocks and ensure conditions unfavorable for viruses and favorable for a harmonious flow of life.